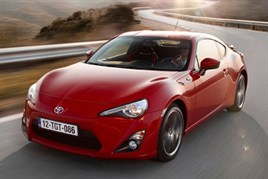 The campaign called “The Real Deal” is set in an animated virtual world in which a male character described not being real and how he had no feeling, until he drove the GT86.

The car is shown being driven at speed, being followed by a police helicopter and being chased through narrow virtual streets.

The car is then shown escaping the city and following signs to "the end of the world". The car burst through a glass barrier into the real world.

Toyota said the aim of the ad was to highlight the GT86's point of difference to other cars: that it was a car built for control, handling and driving enjoyment and was not built for speed.

It said the the ad was clearly set in an animated, artificial and fantasy environment.

The ASA said: “While we appreciated that in the world where the ad was set, cars could drive themselves, objects could miraculously appear or disappear and certain everyday objects were contraband, we considered that the roads, public spaces and the car featured in the ad were recognisable as such and were not significantly different from those in the real world.

“We therefore considered that the driving featured, and in particular the speeds shown, could be emulated on real roads.

“We also considered that the highly stylised nature of the ad glamorised the reckless manner in which the car was driven. Because we considered the ad portrayed speed, and the way the car could be handled in a manner that might encourage motorists to drive irresponsibly, we concluded that the ad was irresponsible and condoned dangerous driving.”

The ad must not appear again in its current form. There is now a shorter version on Toyota UK's YouTube channel.

The publicity of having the advert banned could actually end up making the marketing campaign more popular with enthusiasts.