The average UK dealer made a £50,000 profit in September with return on sales sitting at 1.3%.

According to the latest figures from ASE, this peak has been slightly driven by changes in accounting policies from some of the larger groups who are now only including volume bonus at the end of the quarter once achieved, rather than drip feeding in on a monthly basis expecting to hit the target.

Mike Jones, ASE chairman, said: “This is a very good result and sees the average site £36,000 ahead of the result for the same period in 2011. 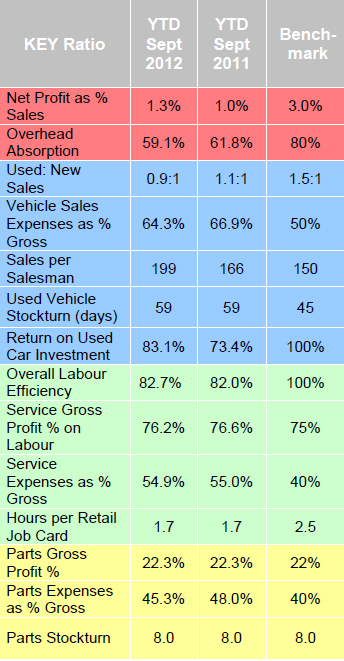 Used vehicle performance has improved compared to 2011, with the fall in the used to new ratio a result of the large increase in average volume of new vehicles sold.

In addition used vehicle margins are up and are now averaging over £1,000 per unit and over 12%. This has been driven by an improvement in focus allied to stability of used car prices with minimal book drops during 2012.

Service performance remains a challenge with volumes of retail hours falling amongst most brands and dealerships.

While the service departmental statistics are similar to those in 2011 we ASE is seeing a reduction in volume passing through service departments which is providing the continued drop in overhead absorption down to 59.1%.

Only those dealers who have revolutionised their sales process are managing to reverse this trend.

Jones said: “With a fair wind during the final quarter dealers could end the year with an average return of over 1.0% which will be a great result given the current economic backdrop.”