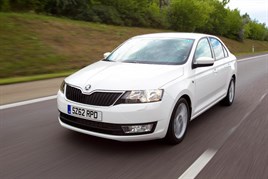 CAP Monitor believe Skoda’s move to launch a small saloon in the UK with its new Rapid is a successful tactical move by the brand to exploit a growing appetite for basic, well-engineered value for money cars.

Skoda’s move to launch a new small saloon style hatch in the UK has been seen as a step back for the brand by some with a model that’s doesn’t necessarily fit with consumer tastes here.

However, CAP believes the opposite will be true, as Skoda has stolen a march on its European rivals by moving away from the small/medium people carrier and returning to a more traditional car design.

As Skoda moves the new Octavia upmarket, the Rapid will be available for customers that are not ready to move up the range and will also capture interest from people that are tightening their belts.

The UK is also expected to be the third largest market for the car after the Czech Republic and Germany. There will also be a version for Seat in the form of the new Toledo.

The Rapid has been launched with just three models in the range – a tactic CAP believes will work well in the future used market by reducing the chances of trade caution that often besets other manufacturers with more complex ranges.

Jeff Knight, CAP Monitor editor, said: “At first glance the Skoda Rapid is a car that simply does a basic job well at a value for money price but that interpretation misses the key point.

“By departing from the pack and staying away from the typical small people carrier design that has become the norm in recent years, Skoda has created a car whose time is now.

“While everyone else seems to be constantly trying to re-invent the wheel and create fresh demand for something brand new, Skoda has slipped in with something we believe many people will want both as a new and a used car.

“It’s a clever tactical move, in our view, to create a vehicle that probably won’t set the pundits’ hearts racing but will appeal directly to cost-conscious families and company car drivers looking to keep their P11D tax payments as low as possible.”

Knight expects the Rapid to compete strongly not only with the rest of the C sector small family car bracket but also steal sales of more premium vehicles in the late plate (nearly new) used car market.

He said: “These are tougher times for motorists than we have seen for many years and we believe many car buyers are suffering what we call ‘innovation fatigue’.

“Cars are loaded with gadgetry and features in what has become a kind of specification arms race. In many cases, people simply don’t need everything available to them in the modern vehicle.

“Suddenly Skoda has revealed a car that makes no attempt to fight in that battle and also cleverly provides a real challenge to the emerging far eastern brands that have stolen so much ground on the European manufacturers in recent years.

“And by having a simple line-up of S, SE and Elegance, any future caution about model identification in the trade will be averted.”

Future residual values for the Skoda Rapid are forecast between 31% and 33% of cost new, after 3yrs/60,000 miles, depending on the specific model – a figure that compares well with its competitors.