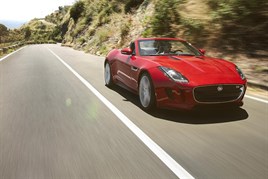 Jaguar is presenting the new F-Type as a return to its heartland. For more than 25 years after the war, Jaguar was synonymous with two seater sports cars, first with the XK 120 and then the E-Type. Although the i-word is thoroughly hateful, it is hard to argue against describing both as “iconic”.

Adrian Hallmark, Jaguar’s boss, describes the F-Type as the “orientation point” of Jaguar. Without such a car, buyers lack a clear view of what Jaguar stands for. Furthermore, he believes that a brand can only expand successfully if it keeps its core model strong.

Jaguar is certainly right to say that it needed a car to make its brand relevant again. It has massively improved its range over the past five years, but too many people still have prejudices about Jaguars being big saloons for old men. The role of the F-Type is not to sell in big numbers, but to make the Jaguar brand relevant to 30-somethings who could be in the market for an entry-level XF now, or in the market for Jaguar’s 3-Series rival in a few years time. Indeed, the sales projections are so modest that it could not be justified if it did not bring spin-off benefits.

In contrast, think of Volvo. From the 1960s to the early 1990s its heartland car was obvious: the large estate, whether it was the 145 or the 940. Now that BMW, Mercedes-Benz, Audi (and as of this year Jaguar) all have executive estates, life is more difficult. Combined with the fact that SUVs have taken much of that market, Volvo does not really have a heartland car anymore.

Of course, as many manufacturers’ ranges expand, it becomes harder to identify the heartland. It was significant that when Audi launched the A1, it said: “Audi will define the A1, the A1 will not define Audi.” The meaning of that was: “This will never be our heartland car, because that would dilute our image and make it harder to sell A6 and A8.”

In fact, the strength of the heartland model says a great deal about the brand as a whole. Peugeot’s heartland car was the 205 and 206. When the 207 failed to live up to the standards of its predecessors, Peugeot was in serious trouble. The job for the 208 is effectively to re-establish the Peugeot brand in Europe.

Similarly, the fading Clio has been one of the key reasons behind Renault’s decline.

The implications of this for Fiat of this are extremely serious. Its heartland was always the Uno/Punto supermini, but the Punto is now little better than the walking dead. That leaves the 500 as the heartland car. However, the fact that an entire volume brand rests on the narrow shoulders of a niche city car is a pretty scary prospect.

This game can be played with any brand. Volkswagen? The everlasting, bomb-proof Golf. Toyota? In Europe it used to be the dull but dependable Corolla. Now it does not have one, which says a lot about Toyota’s loss of market share. Conversely, Nissan had no heartland car 10 years ago, but now has the hugely-successful Qashqai.

The brand which is most likely to echo Hallmark’s comments in the next few years is sister brand Land Rover. While the Range Rover brand has about the clearest image in the entire market, Land Rover has become a little fuzzy. Its heartland car was the Defender. However, it now sells in small numbers and legislation means all are registered as commercial vehicles.

In fact, Land Rover could be described as the exception that proves the rule. Its heartland car has not remained strong, but it has found an alternative heartland as a premium SUV brand. No doubt it is thinking how strong it could be with a competitive new Defender back as its heartland vehicle. Around 2015, we are likely to hear Land Rover reprising Hallmark’s comments, with only the details of the product having to be changed.