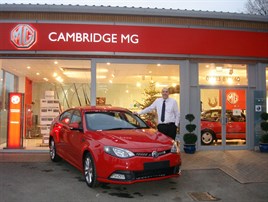 MG Cambridge is run by Buckingham & Stanley, which formerly represented Saab and still has a Chevrolet franchise.

Andrew Ballard, operations director, said: “We’ve been very impressed with everything we’ve seen at MG Birmingham and the MG6 is a great car which will win over a lot of people.

"We have represented Saab for more than 30 years and I think the new MG’s will certainly appeal to Saab drivers too.

“To be associated with such an iconic brand as MG is really exciting and our team is looking forward to offering our new MG service to customers.”

Cambridge MG officially opens on Tuesday, December 18 and is the latest retail business to join the ranks of MG dealers across the UK.

The other new MG dealerships which have been opened this year are: Beechwood in Derby, Pinkstone Cars in Stoke-on-Trent, Rivervale in Brighton, Charles Warner in Lincoln, Colleys in Cwmbran and Brown & Gammons in Baldock, Herts.