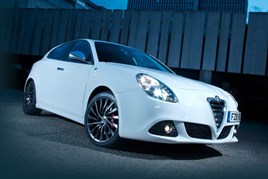 There were some pretty wild swings last year in the fortunes of carmakers competing for sales in the shrunken UK car market.

Within a market down just under 5% to a little under two million, several brands managed to lose a third of their business, including Renault, Mazda, Subaru and Smart.

Meanwhile, the Volkswagen Group never missed a beat with its volume brands of VW, Audi, Seat and Skoda all taking a higher share of the market.

Japanese brands had mixed results – the premium pair of Infiniti and Lexus made huge jumps of 65% and 33% respectively while their parent brands had very different results.

The French stablemates, Peugeot and Citroën, slid back by 13% and 6% respectively. Peugeot’s fall was completely contrary to internal forecasts publicised at the start of the year.

The two dominant UK market leaders, Ford and Vauxhall, both lost share – both down by 5% in volume.

What has been extraordinary is the ever-growing German premium segment.

Audi burst through 100,000 registrations while BMW grew by 7% relative to 2010, with its Mini subsidiary growing by double that. Mercedes was up by 9%.

But the prize for most exciting revival must go to Alfa Romeo, whose new model programme has created a stronger following, a 31% improvement in market share and a modest offset to the worrying 22% decline of sister brand Fiat.

What has been going on in other segments?

The first surprise is that the low-cost small car sector did very badly, and the second is that SUVs did very well.

The rot only stops when car sticker prices start to rise. Upper-medium/executive sales were 6% higher than in 2010. Luxury did even better and volume went up by 13%.

Sports cars got blown away. That segment was down 6% year-on-year, which is hardly surprising.

It is hard to persuade your out-of-work next-door neighbour that a new, 3.0-litre soft-top is an essential purchase.

The most common explanation for the SUVs’ 14% lurch forward was that last year’s winter weather made more people realise they could escape the effects of snow if they had good ground-clearance and all-wheel drive.

The final sector, MPV, was not viewed in a similar light and dropped 5%.