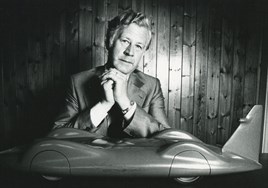 Professor Merrick started his career within the motor industry with a three year student apprenticeship with the Rover Company, Solihull. He then joined the entrepreneurial race car builder Cyril Kieft as a hands-on mechanical engineer plying his talents into the creation of the early post war 500cc single seat racing cars.

He established a design and engineering function that was eventually sold within the international market and at the same time developed a design for a new ‘motor panels standard cab’ for truck manufacturers which was bought by Dennis, ERF, Foden, Ford, Guy and many others.

He became chairman and CEO of the Motor Panels Group handling the transfer from the Rubery Owen Group, who had been responsible for the building of the Bluebird Land Speed record contender driven by Donald Campbell CBE.

Under his control The Motor Panels Group subsequently joined up with the IAD Group, absorbing their International Design Division, with operations around the globe.

The combination traded successfully securing substantial new business with major manufacturers including Aston Martin, BMW, Chrysler Ford and GM USA, Jaguar, Rolls-Royce and Rover and had a turnover of £350m.

The Group became an acquisition target for Mayflower PLC and subsequently Merrick Taylor OBE became chairman of Mayflower Automotive Products PLC from 1991 to his retirement in 1994, having set up major manufacturing units in China, India, Indonesia, Malaysia, South Africa and the USA.

His passion for all things motoring and his business success allowed him to indulge his interest in racing cars and an enviable collection of classic vehicles garaged and worked upon with the fastidiousness that was typical of his nature.

Frustrated not to have been a regular racing driver he built friendships to allow his pleasure to be shared by entering in the Retro “Mille Miglia” around Italy in his favoured Jaguar ‘C’ Type and revelled in entering the charity fund raising rallies “The Irish Jaunt”, “The Highland Fling” and “The Swiss Roll.

He leaves wife Gisela, his daughters Annette and Julia, sons-in-law Mark and John and his grandson Thomas.

A memorial dedicated to celebrate the life of Merrick Wentworth Taylor OBE is planned to be staged during the month of June 2012.