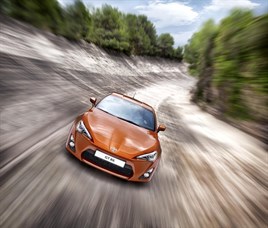 Toyota’s new flagship rear-wheel drive GT 86 sports coupe will be priced from £24,995 when sales start in the UK in June.

Prices had been speculated to be over £30,000 due to the poor exchange rate with the yen, but Toyota has managed to keep the price down.

Advance orders are being taken for the GT 86, with Toyota saying “many UK customers” have already signed up to be among the first to take ownership of the car when it arrives here this summer.

Further pricing and specification details will be announced nearer the time of launch.

View a full gallery of the Toyota GT 86

The GT 86 marks a return for Toyota in making driver focussed cars. The Toyota line-up has been purely focussed on family cars, so this new roadster coupe will add a bit of spice to its model line-up.

It hopes the new 2.0-litre 197bhp, boxer four, limited slip diffed GT 86 will act as the Celica, MR2 and Supra did for the brand not so long ago.