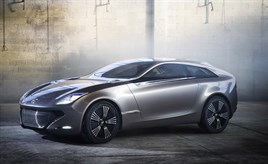 Hyundai has revealed a new concept car which hints at its future design direction.

The i-oniq concept is an electric sports hatchback with a range-extending petrol engine and will be on show at the Geneva Motor Show next week.

The concept features a 1.0-litre, three-cylinder petrol engine which is mated, via a generator, to a lithium ion electric motor which produces 107bhp.

In electric-only mode, i-oniq has a range of 120km, which is extended to 700km with the aid of the petrol engine. Hyundai says the model has tailpipe emissions of 45g/km.

Allan Rushforth, senior vice president and COO of Hyundai Motor Europe, said: “The i-oniq concept has been created to reflect the new thinking that runs through the Hyundai brand.

“It has a bold design, inside and out, that provokes contemplation on the future of automotive possibilities, and a powertrain that highlights one of the ways in which we could power future products – wrapped in a package that exudes premium qualities.”