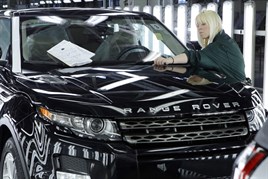 Jaguar Land Rover (JLR) has created 1,000 new jobs at its Halewood operations manufacturing facility, near Liverpool in the UK.

The new positions, which will support the demand for the Range Rover Evoque and Land Rover Freelander 2, take the workforce at Halewood to almost 4,500 – treble the number employed there just three years ago.

“We are moving Halewood to three shifts and 24-hour operation to meet increased global demand for our products."

JLR is expecting thousands of additional jobs to be created in the supply chain.

The new jobs recruited at Halewood will include production operators, supervisors and engineers.

All new employees joining the production line will receive training towards an Intermediate (Level 2)apprenticeship.

"Again, Britain's car industry is bucking the trend of manufacturing decline. It is proof that with the right investment and support, UK manufacturing can be a success story.

"This is another major vote of confidence for the skills and dedication of the entire workforce across Jaguar Land Rover. These new jobs come on top of 1,000 jobs currently being taken up in Solihull in the West Midlands."