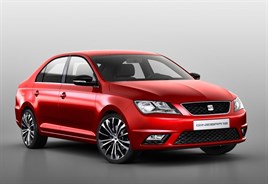 Seat is bringing back its Toledo and has revealed a first glimpse a new concept which will be on show at the Geneva Motor Show next week.

The next generation of the Toledo will be a more conventional five-door hatchback design, as opposed to the previous model which was an MPV style model.

This new Toledo concept is close to being a production model which is likely to go on sale in Spain first in the spring.

Head to AM's gallery section to see all the pictures released of the new Toledo concept.

Measuring 4.48 metres in length, the new Toledo will offer 500 litres of boot space and the convenience of a large rear hatch and folding rear bench.

Seat is attempting to combine a coupe-like profile with the functionality of an estate car.

“It is an excellent combination of emotional design, top-level usability and dynamic driving characteristics.

“The subsequent production model, our new Toledo, will write a whole new success story with its clear Seat identity, its excellent quality standard and exceptional value-for-money.
“Following the Mii family and the new Ibiza, the new Toledo marks the next wave in our model offensive and growth strategy.”