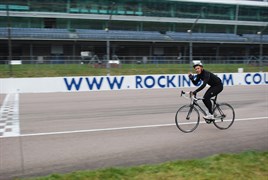 Seven teams from across the industry completed a total of 1,165 laps of Rockingham Motor Speedway Circuit covering 2236.8 miles between them. This is the equivalent of travelling from BEN's Head Office in Ascot to Le Mans, France and then nipping down to Monaco for a lap of the F1 Circuit, over to the Nürburgring and then back to BEN with a few miles to spare.

Leading the pack with a total distance of 244 laps and taking home the BEN 24 hour Cycle Challenge Trophy was the B&C Express team, closely followed by The AA's Head Office with 236 laps, and third place went to The AA's London Patrols with 204 laps.

Kelly Neal, BEN events manager, said: “I would like to thank everyone that attended for making BEN's newest event such a great success.

“Over £3,000 was raised for BEN. Not only did everyone battle through the rain but the night as well. We send our congratulations to the B&C Express team for being this year's winners and look forward to seeing everyone for the next cycling challenge."