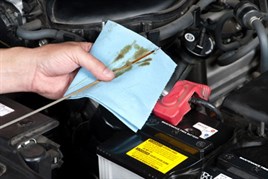 Service advisers should ‘tell a story’ when it comes to selling oil.

Not in a fictional sense, but as a means of increasing a car owner’s awareness of the value of a particular brand.

As Castrol’s Nigel Head explained: “Rather than just hand the customer the service invoice and ask for method of payment, it’s important to explain what’s been done – especially when it comes to an oil change.

"So the conversation (at a BMW dealership) should be along lines ‘we’ve drained off your old oil, replaced the filter and re-filled with Castrol Professional, the only oil recommended by BMW...’.”

Head, Castrol Professional OEM and franchised workshop marketing manager, added: “From a marketing point of view, oil is in the low interest category.

"There’s a vacuum of know-ledge, so the temptation is to go for lowest price. Hence the need to build a story round the product’s refinements.

"Other oils may meet manufacturers’ spec, but there are degrees of tolerance. Castrol Professional is endorsed by no fewer than 10 car manufacturers.”

It’s a theme also taken up by Shell Helix marketing manager Harriet Gudge, except in Shell’s case, naturally, it would be its Helix brand.

“There’s a tendency among aftersales advisers to think of other things to promote rather than oil because there’s more of a margin, air con filters, for example,” she said.

“We’re not just talking about upsell opportunities, but the real need to inform consumers about the importance of engines having the appropriate oil specification.”

"Explain that viscosity is the thickness of the oil, is linked to engine friction and lowering it can help improve fuel economy.”

Ellis said the latter point should include the important proviso “that the integrity of the engine’s components are not compromised,” by using low viscosity products.

One key point repeatedly emphasised by suppliers was that “gone are the days when oil was just oil”.

Brian Hayes, channel programme specialist for Chevron Lubricants, pointed to additives used in engine oils that, when they leak past the piston rings and get into the combustion side of the engine, can produce ash when burned

This ash can cause filter clogging. Hence the move to ‘low ash’ oils typically used for diesel vehicles that have a DPF (diesel particulate filter), so any oil carryover into the exhaust system does not foul the particulate filter.

“Today’s diesel engines are as advanced as their petrol counterparts and now that diesel is more expensive, it’s imperative to maintain them at maximum efficiency,” said Hayes.

Nigel Head also pointed to engine downsizing and greater use of turbos, which imposed more stress on operating pressures.

“Over the past 10 years, the amount of operating pressure has basically doubled, placing extra demands on oil.”