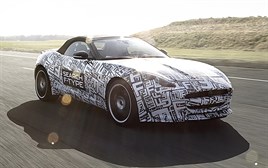 Jaguar will launch its new F-Type sports car as a convertible in the UK in early summer 2013.

The new model will help the UK-based brand compete with models like the Porsche Boxter, Cayman and 911 with prices expected to be around £55,000. A F-Type coupe is likely in 2014.

The new model is based on the C-X16 concept from September 2011 and the new prototype looks to have kept many of the same design cues. It will be built at Jaguar’s Castle Bromwich factory near Birmingham.

View all the official images of the new F-Type in AM's gallery section.

Speaking at the New York auto show Adrian Hallmark, Jaguar global brand director, said: "We showed the C-X16 concept in September 2011, and the reaction to it has been so positive that we've accelerated our development of an all-new Jaguar sports car.

"That car will be called the F-Type, and it will be unveiled in production form later this year.

“The core appeal of Jaguar's cars is their sporting heart, and that heart will beat stronger than ever before in the F-TYPE. Its development is a vivid representation of the confidence and ambition of the Jaguar brand, and the desire among our engineers and design team to produce a world-leader in a market segment that we have been absent from for too long. But no longer – the F-Type is coming."