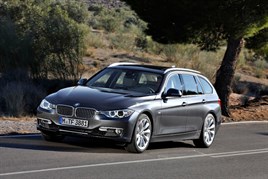 BMW dealers have sold 51,000 models of the current-shape E91 3-Series Touring in the UK which is the third most popular market for the model in Europe after Germany and Italy.

To view the full gallery of pictures for the new 3-Series Touring head to AM's gallery.

An M Sport trim package will also be available from launch in September.

A 320i, 316d and 318d will join the model range in November and it’s likely the range will feature further additions next year.

All models are available as six -speed manuals on the four-cylinder models; the eight-speed automatic is optional on all models, and standard on the six-cylinder.