The UK is outperforming much of Europe for new car sales as it continues to struggle with the consequences of an uncertain economy. Total European sales were down 6.1% in April and 7.1% year-to-date.

Although the market is still down on 2011, April experienced the lowest drop in month-on-month sales so far this year.

Four of the top ten brands achieved an increase in April sales compared to 2011.

Renault and Opel/Vauxhall experienced the largest fall in sales during April of 16.9% and 16.1% respectively. Volkswagen maintained its leading position, ahead of Ford.

Mercedes achieved the greatest increase in sales (+5.4%) in the top 10 brands, partly due to new or improved models such as the B-Class and C-Class. Meanwhile Citroën recorded a 4.5% increase in April sales, with strong sales performances for the new DS4, DS5 and C4 Aircross models, and increased sales of the C3 model in France and Italy.

Outside the top ten, Land Rover sales increased by 54.7% largely due to the success of the Range Rover Evoque, and sister brand Jaguar recorded a 47.0% increase in sales following the introduction of the facelifted XF now available with a smaller 2.2-litre diesel engine. 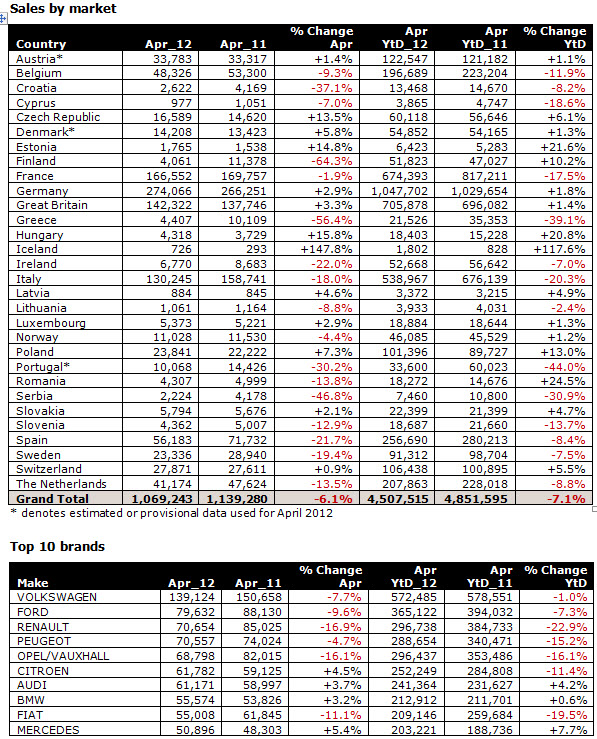 > All data provided by JATO Dynamics.