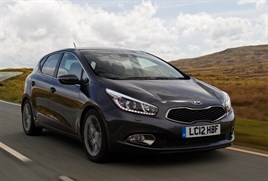 The Korean brand believes the new model will take the company “into an altogether different league” in comparison to the first model which pioneered the seven-year warranty and paved the way for growth in Europe.

The original Cee’d made its debut at the Paris Motor Show in 2006 – at the same time as Kia introduced Peter Schreyer as its new chief design officer.

Their simultaneous arrival meant Schreyer only influenced small details on the first generation Cee’d. However, this new model has been crafted by Schreyer with a team led by European design chief Gregory Guillaume.

See the full gallery of the new Kia Cee'd in AM's gallery section.

Four engines will be available at launch – 1.4- and 1.6-litre diesels from Kia’s U2 family and petrol engines of similar capacity from the Gamma range.

The 1.6-litre diesel with ISG can reach 76mpg, with CO2 emissions from 97g/km, depending on the wheel and tyre combination. It is available with a conventional six-speed automatic gearbox in place of the standard six-speed manual. The CO2 emissions of the 1.6 CRDi automatic are 145g/km.

Both packages cover the car, not the owner, so are transferable should the vehicle be sold.

If a vehicle with a Care-3 package is sold on then the next owner may upgrade to the five year service package. The cost of the vehicle’s first MoT test fee can be included for an additional £30.