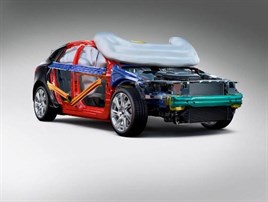 The world's first pedestrian airbag fitted as standard on the all-new Volvo V40 is being hailed as the next step in the manufacturer's aim that no-one should be killed or injured in a new Volvo by 2020.

The new airbag is launched one year after Volvo - a strategic partner of the Parliamentary Advisory Council for Transport Safety (PACTS) - joined road safety experts and MPs to set the blueprint in the UK for safer roads over the next 10 years with the launch of the United Nations Decade of Action for Road Safety.

Every year 1.3 million people are killed on the world's roads with 24,510 killed or seriously injured in the UK.

In 2008 Volvo stated that "by 2020, nobody shall be seriously injured or killed in a new Volvo" and to contribute towards the aim, it has fitted technology including pedestrian detection, city safety and the pedestrian airbag.

The pedestrian airbag technology was launched in the new Volvo V40 in Geneva earlier this year and will to be fitted as standard to all specifications.