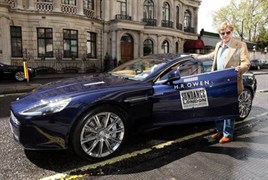 HR Owen has partnered with the inaugural Sundance London Festival as part of its new “brand attitude” plans which it has called “experience is everything”.

As part of the sponsorship deal, Redford, actors and directors were driven around the festival with Aston Martins supplied by HR Owen to and from the O2 arena venue where the event was being held.

In addition to sponsorship activity, the group is investing further in digital advertising, the roll-out of a new group-wide brand identity and a push for more luxury lifestyle profiles.

In May 2011 HR Owen announced the outcome of its corporate strategy review, confirming its focus on luxury and supercars and looking for new opportunities to extract greater value from the existing businesses.

Execution of the new strategy is now well underway with new chief executive Joe Doyle in place. The group is making a deliberate effort to look beyond just the motor industry for engagement and opportunities that can “help deliver the best possible customer experience”.

HR Owen also partnered up with London Fashion Week at the start of the year, providing supercars to journalists covering the event for Stylist Magazine.