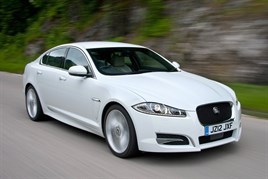 Lexus came in joint second place in the survey with Skoda.

The study was based on the evaluations of nearly 18,000 individuals in the UK after an average of two years ownership.

Every aspect of vehicle ownership was rated from performance, design and comfort to quality, reliability, and cost of ownership, economy and dealer service satisfaction. The resulting data allowed the study to be the most comprehensive of its kind.

As well as heading the rankings for manufacturers, Jaguar was also successful in individual categories. The XF gained 15 places within 12-months to claim the ‘Executive Car of the Year’ title.

Jeremy Hicks, Jaguar Land Rover UK managing director, said: "To be awarded the number one spot by JD Power is a huge honour – not only for the staff of the 90 Jaguar dealers in the UK but for the circa 2,000 employees at the Castle Bromwich factory and the talented designers and engineers based in Warwickshire whose determination, attention to detail and commitment to quality have delivered this result."

Chevrolet took the bottom position at 27 and Vauxhall was in second to last place at 26.

The 2012 survey included only one Chevrolet, the Matiz, because recently released models such as the Spark and Cruze were still too new to appear.

Dealer service was one of the Chevrolet’s less criticised areas, so the brand should be able to improve its position next when new cars are included.

Honda is fourth in the rankings, which are drawn from the evaluations of almost 18,000 online interviews of UK car owners. Mercedes-Benz comes fifth, while Toyota, Audi, Volkswagen, Volvo, BMW, Nissan and Land Rover are all placed above the industry average.

The study measures customer satisfaction with the vehicle and dealer service, which is based on evaluation of 66 attributes grouped in four key measures. In order of importance, they are: vehicle appeal (31%), which includes performance, design, comfort and features; vehicle quality and reliability (22%); ownership costs (25%), which includes fuel consumption, insurance and costs of service/repair; and dealer service satisfaction (22%).

The study also reveals the ratings of 118 individual models, with the Kia Sportage posting the top score for customer satisfaction. The Vauxhall Vectra sits at the opposite end of the scale, behind the Nissan Pixo.