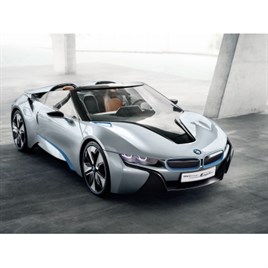 BMW boss Ian Robertson has announced that new generation three-cylinder petrol engines for the future BMW i8 plug-in hybrid sports car will be produced exclusively at the BMW engine plant at Hams Hall, near Birmingham.

Robertson made the announcement today at the SMMT 2012 International Automotive Summit at Canary Wharf, London.

Robertson said: “Our Hams Hall engine plant, which last week celebrated production of the three-millionth engine since the plant was opened in February 2001, will make an important contribution to the future success of the new BMW i brand and the company’s strategy for achieving sustainable mobility.

The i8 will be capable of accelerating between 0-62mph in under five seconds and is expected to deliver 78mpg.

Despite the current economic difficulties in many countries in Europe, including the UK, Robertson declared his confidence and optimism in the positive development of the automotive sector and its ability to play an increasingly important role as a key sector of the UK economy.

The UK-built engines at Hams Hall are supplied in sequence to production plants in Germany, Austria and Oxford and currently power the BMW X1, BMW 1 Series, the new BMW 3 Series as well as all Mini petrol engines.