Infiniti on target to have 42 UK franchises by 2016 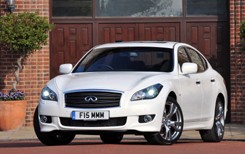 Launching a new premium car brand in Europe in 2008 was viewed by many as Mission Impossible.

“But just like the stars of the films of that title we have successfully achieved our mission and there is a great future ahead,” said Infiniti boss Tony Lewis.

Speaking at the launch of the company’s latest version of its flagship FX model in Munich he revealed that Infiniti was on course to grow its dealer network in the UK from the current six to 42 by 2016 as it goes all out for growth.

“In Europe we are opening one Infiniti centre every two weeks and we will have 230 in western Europe by 2016,” said Lewis, the company’s director for Northern Europe.

He said that Infiniti had sold 145,000 cars last year, which was more than Porsche and Jaguar, and there had been a significant jump in brand awareness.

The key to the expansion was the agreement signed with Daimler in April last year to take new, four-cylinder diesel and petrol engines.
Infiniti had established itself as a sporting brand with its V8 petrol engines and big V6 diesels, but was now looking towards a different sector of the market.

The Mercedes-Benz engines agreed in the April deal will be used in Infiniti’s new G class saloon in 2013, which will challenge cars
like the BMW 3 Series and the Audi A4.

Following on in 2015 will be a new luxury smaller car to rival the BMW 1 Series and Audi A3, the platforms for which will also come from Mercedes-Benz.

Even before the smaller cars come on stream, however, the average age of an Infiniti owner – at 48 – is younger than that of its competitors. They invariably own their own business and have traded up from other premium brands, most commonly BMW.