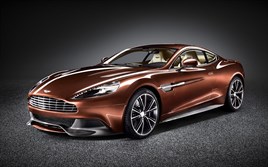 Aston Martin has revealed its new Vanquish model which will be priced from £189,995 when it goes on sale later this year.

View a full gallery of images for the Vanquish in AM's gallery section.

Aston Martin chief executive officer, Dr Ulrich Bez said: “Bearing the same name as the iconic original Vanquish that did so much to cement Aston Martin’s reputation as a maker of great GT cars in the modern era, I believe the car unveiled today once again puts this great British brand at the top of its class.”

The new model is Aston Martin’s most potent production model yet, outmuscled only by the strictly limited edition £1.2m One-77 supercar.

Aston Martin says it has worked to add more practical elements too with a 368 litre boot (a 60% increase in space on the DBS).

Designed and hand-built at Aston Martin’s global headquarters at Gaydon in Warwickshire the new Vanquish, available as a 2+2 or 2+0, sits at the top of the brand’s model range, which includes the DB9, V8 Vantage and four-door Rapide.

Dr Bez said: “The Aston Martin range is stronger now than at any time in our 99-year history. The new Vanquish represents the perfect way to signal the beginning of our centenary celebrations next year.”