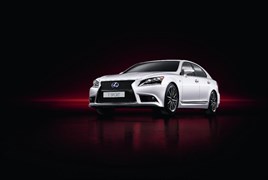 Lexus has revealed details about its new LS range which has revised exterior and interior styling and will gain an F Sport version for the first time when it goes on sale later this year.

Lexus says there have been “more than 3,000 changes” on the new LS following customer feedback. All lights including on the new model come available with LED technology, there’s a new front end face and Lexus has improved LS’s adaptive variable suspension with a new four-wheel interlock control, which suppresses roll, pitch and heave vibration at all four wheels simultaneously.

The new F Sport grade combines a sportier body kit and will help Lexus to compete with models from BMW’s M-Sport and Audi’s S-Line.

F Sport models will be lowered by 10mm, include Brembo six-piston calliper front brakes and paddle shift controls. Customers will also get an intake sound generator on the engine that amplifies the vibration of the intake pulse and pumps the engine sound into the cabin.

The new Lexus LS 460 and LS 600h will go on sale in the UK later this year, with further details of performance, specification and pricing to be announced.