VW looks to increase Up production for UK demand 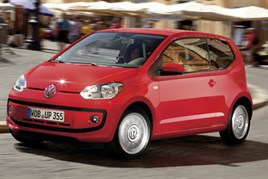 Volkswagen is experiencing 'serious shortages' of some models in the UK as a result of fluctuations in demand in some major European markets.

While problems in the Eurozone are hitting sales in Italy and Spain, demand in the UK is higher than predicted.

Adrian Rushmore, managing editor, Glass’s believes further deterioration in the value of the euro against the pound will make manufacturers look to allocate more of their surplus production to the UK due to the favourable exchange rate (for more on Rushmore’s view see the next issue of AMe ).

VW dealers are currently quoting a two-month delivery time for the Up unless they have one in stock, and it is the same for most versions of the Golf - and even longer for the Golf GT. Stocks of the Passat are also extremely low, although extra supply is now in production.

VW admits it under-estimated the likely demand in the first half of this year. The problem is that it is not easy to ramp up right-hand-drive production immediately because certain components, such as dashboards and steering racks, are specific to RHD models.

VW is planning to ramp up production of right-hand-drive models from the start of September to bring supply closer into line with demand.