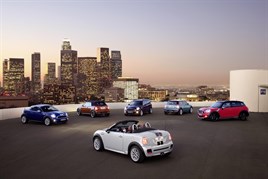 BMW is investing a further £250 million in its Mini Oxford plant as it looks to expand the brand’s model range to 10 models and increase volumes.

It comes on top of the £500m UK investment announced in June 2011 and means additional job security for the 5,500 UK staff.

The investment will be spread across the plant at Oxford, steel body pressings operation in Swindon and at the engine building facility at Hams Hall, near Birmingham.

Mini already has seven models and is expecting to develop a new interpretation of the Clubman estate, a new MPV codenamed “Spacebox” and potentially a production version of an electric vehicle. Plans for a mini Mini called the Rocketman were scrapped last year, but a new Olympic concept raised hopes that the model could be reconsidered by German bosses.

The extra volume for the growth strategy of the Mini brand and the complexity of new model lines means that additional production capacity for Mini sales beyond Oxford's maximum capacity is needed in the medium term and the company is now considering how to achieve this.

Harald Krueger, member of the board of management BMW Group, said: “Our preferred option is to establish a contract manufacturer as a satellite production as close to our UK operations as possible, at the Nedcar plant in The Netherlands, with whom BMW is in discussions.

"Oxford will provide special Mini production expertise for any new operation, particularly in the areas of dealing with the high complexity and customer individuality which Mini demands and in operating state-of-the-art, multi-model production lines.

“Just as Munich is the centre of the BMW world, Oxford is and will remain the home and the heart of Mini."