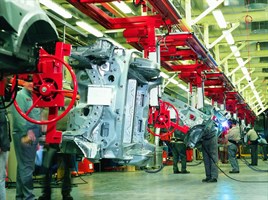 The UK car market could see a sharp rise in pre-registration activity towards the end of this year as exchange rates favour the pound and manufacturers look to offload surplus production.

Adrian Rushmore, Glass’s managing editor believes there is a real danger the market could return to the “dark days” of 2007 and oversupply.

Mike Pilkington, Manheim Remarketing’s managing director, said: “It’s been a matter of some debate that, with the tough market in Europe and change in the exchange rates, the SMMT figures belie a flat retail market and growth is actually around new cars being forced into the dealer network.”

Outside of the fleet sector, new car registrations in the retail sector are up nearly 9% year-on-year, according to the SMMT. Paul Everitt, SMMT chief executive, told AM he believed private growth was geniune retail activity.

Pilkington said: “Over recent months retailers have been complaining of more pressure to take vehicles for other than genuine customer needs.”

Sales are down across Europe and with a strong pound the UK could become the dumping ground for new product.

“Even the German market, which was considered to be pretty solid, is wobbling a bit,” said Rushmore. “The pressure on mainland Europe is growing.”

CAP communications manager Mike Hind similarly recognises a range of factors coming together which could potentially lead to a greater drive for new car volume into the UK market in the coming months.

He said: “We are now in the sterling/euro exchange rate zone which makes landed costs in the UK more attractive just at a time when demand is falling away dramatically in Europe.

“Factories which are geared up for particular production volume need somewhere to send that product and the plethora of new car offers already available suggest the UK is seen as ripe for an increase in new car sales.

“This year’s balance of supply and demand has led to more stable used car values than for several years and therefore any significant increase in supply would have to be matched with a further increase in demand to avoid downward pressure on values.”

Recent data from Dataforce and BDW Automotive has uncovered that three in 10 new vehicles in Germany are pre-registered.

Germany is the largest car market in Europe and nearly half a million pre-registrations in the first half of 2012 mean distortion in registrations is greater than Spain’s total new car market.

Gareth Hession, vice president for research at auto industry forecaster JATO, told Reuters: “I have to admit I was surprised how high self-registrations are. "It seems that people are burying their head in the sand."

Head of the German Federation for Motor Trades and Repairs (ZDK) Robert Rademacher told Reuters: “If you stripped out those distressed vehicles registered only so they can gather dust on the parking lot of a dealer or manufacturer, then the size of the German new car market would have been below 3 million vehicles last year (instead of 3.17 million.

"And it's not only irresponsible but also counterproductive to use force to jam these vehicles down the market's throat, since it doesn't lead to higher sales in the end. It only creates distortions down the road."