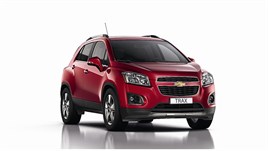 Chevrolet will debut its new Trax small SUV at the Paris Motor Show next month.

The new model will round out the brand’s SUV line-up alongside the Captiva and shares the same model architecture as Vauxhall's Mokka.

UK sales are expected to start in early 2013 with pricing close to rivals like the Skoda Yeti which starts at £14,945

The five-seater will come with a choice of a 1.4L turbocharged petrol unit, a 1.6L petrol engine as well as a 1.7L turbo-diesel engine.

The 1.7L diesel engine will deliver a power output of 130bhp and a maximum torque of 300 Nm.

All powertrains with manual transmission come with start/stop functionality. Both the 1.7L diesel and the 1.4L turbo petrol engine will also be offered with a six-speed automatic transmission.

Upper trims will be equipped with Chevrolet MyLink as standard. Chevrolet MyLink is an infotainment system that aggregates content from smartphones onto a seven-inch, high resolution, full colour touch-screen display. As of this winter, MyLink will feature a navigation app which can be downloaded onto compatible smartphones. It will project the route calculated by the smartphone onto the system’s touch-screen.