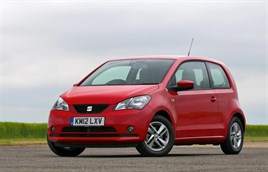 Seat has added an automatic transmission to its Mii city car range in time for the September plate-change.

The Mii Auto is 2.7mpg more fuel efficient on average than the Mii Sport at 62.8mpg, which has the same 1.0-litre 73bhp engine with a manual gearbox. Carbon dioxide emissions are slightly lower than the Mii Sport too at 105g/km in comparison to 108g/km.

The gearbox is only available with the 73bhp engine and in SE trim, making Mii Auto a standalone model.

There are currently no plans to offer it with the lower powered 58bhp engine (with which it shares identical average economy and CO2 figures).

Performance is only marginally affected by the loss of a manually operated clutch, with the Mii Sport’s 13.2 second 0-62mph benchmark increased slightly to 13.9 seconds in the Mii Auto. Top speed remains at 106mph.

There are only three gearbox settings for drivers to choose from: neutral (N), drive (D) and reverse (R). Unlike most automatic gearboxes, it has no ‘park’ setting, and there is no ‘crawl’ function when the brake is released; if the car is switched off while in drive mode, first gear is automatically engaged. The driver has the option to manually select gears using the lever.

The Mii Auto comes in both three- and five-door body styles and is available to order now, priced at £10,390 and £10,740 respectively. The first cars will hit the road in early November.