Vertu chief talks up motor retail industry ahead of plate-change 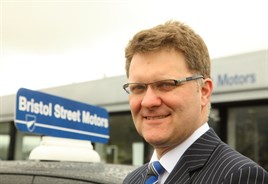 Robert Forrester, Vertu Motors chief executive, has highlighted the importance of the motor retail industry to the UK ahead of the plate-change which starts on Saturday.

Forrester describes the plate-change month of September as likely to bring a VAT revenue “windfall” of up to £500 million as 165,000 cars are expected to be registered.

Forester said: “In addition the road tax from each new vehicle will be paid instantly to the DVLA; if each vehicle was assumed to be a family car such as the Ford Mondeo paying £120 per year, the windfall would be nearly £20 million.

“If motor vehicle sales continue their upward trend the number will be over £60 million from new cars alone.
“Obviously this needs to be set against the cars that are traded in that previously paid higher road tax and those which might come off the road, nevertheless windfall months are important to help the Chancellor deal with the public spending deficit.

“His normal windfalls are in the months of January and July, when self-employed people pay their income tax. Based on the performance of the UK motor sector he can add March and September when the registration plates change.”

He said: “Dealerships are innovating; we are no longer just showrooms with slick salesmen but businesses that offer genuine all round service.

“If the route to market is improving through dealer investment, training and improvements to reputation and service then the motor manufacturers can reach their customers with confidence and success.

“Secondly, the British economy is performing better than many realise. The level of the pound helps keep the imported products competitive and, despite the banker bashing that is commonplace in the media, credit is available at record low interest rates and in increasingly flexible packages.”

Forrester believes customers are coming back and the industry is playing a part in turning around Great Britain plc.