Stevens, the two-site Vauxhall, Network Q and Chevrolet dealer in west Sussex has gone into administration after attempts to find a buyer failed.

Smith & Williamson has been appointed as administrators.

In the same week Smith & Williamson has also been appointed at Approach (UK), another Vauxhall dealer in Andover and Salisbury.

Stevens, sponsored by Vauxhall, has been running at a loss for some time and the manufacturer - also a shareholder since Stevens' founding in 2000 - said it has provided "significant funding" to try and turn the business around.

In a statement Vauxhall said: "Due to the current economic climate, notice of intention to appoint and administrator has been given in relation to Pearl (Crawley) Ltd (Stevens' legal entity).

"All staff working in these dealerships were notified of the position and there has been ongoing employee consultation, following which they were notified that no buyer has been identified and they were regretfully made redundant with immediate effect."

Stevens has sites in Horsham and Crawley.

It sold around 2,000 new and used cars and vans a year and was established in 1963. Retail operator Peter Stevens led a management buyout in August 2000.

The Stevens' website has this message on it: "I have to inform you that at present the businesses at both Horsham and Crawley are closed during a period of consultation whilst a buyer for the company is being sought.

"I regret therefore that your telephone and/or email enquiries will not be answered at present. More information will be posted soon. In the meantime, if your need is urgent, I recommend you seek your nearest alternative Vauxhall dealer."

The loss of the two dealerships would mean the nearest Vauxhall dealers now being in Guidlford to the north west (FG Barnes), to the north east at Edenbridge (Whitmore's) and Haywards Heath to the south (Frosts). See map below.

Crawley is now an open point for Vauxhall.

For Chevrolet the lack of a dealer is more pronounced with the closure of the Stevens Crawley site meaning the nearest centre is in Tunbridge Wells to the east (Caffyns).

A former member of staff contacted AM: "All the staff have been laid off with no consultation and, worst of all, no pay. Eighty staff have no money to pay bills or feed their families. We have been told that Vauxhall has no money to keep the dealership open. Is Vauxhall in trouble?" 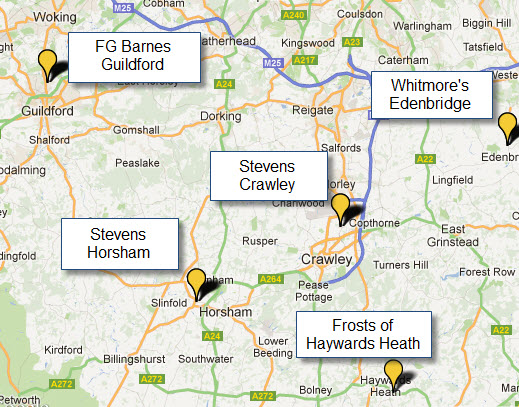