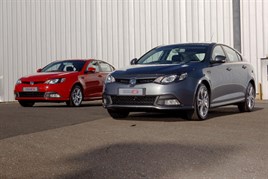 MG is offering a £3,000 discount on its MG6 range when customers trade in their old car.

The reduction puts the MG6 starting price down to £12,455 after the trade-in discount. Any make of car, as long as it has an MoT valid for at least 14 days, can be traded in.

Free fuel for 15,000 miles is being offered on MG6 models under a separate deal. Under this scheme customers will be given a Fuel Genie card, with a value of £2,400, which can be used at Tesco and Morrisons supermarket fuel stations.

Both deals will run until the end of the year.

MG registrations were down by 71.43% in August to six units. However, year-to-date registrations are up by 203.80% to 559 units as the brand looks to establish some market share which currently sits at 0.04% year-to-date.