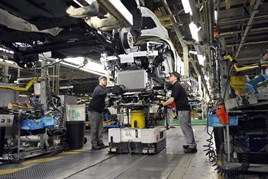 According to the latest figures from the Society of Motor Manufacturers and Traders (SMMT) commercial vehicle output rose 18.3% to 7,608 units in the month, but fell 5.5% to 72,708 units during the first eight months of 2012.

Paul Everitt, SMMT chief executive, said: “UK vehicle production is 11.2% up this year, but down 7% in August.

“Volumes are traditionally low and variable in August as manufacturers use the holiday period to undertake important maintenance and facility upgrades.

"Continued weak demand in Europe is a concern, although significant new investment and stronger demand from better performing global markets will ensure UK output continues on an upward trend."

AM Poll
What is your take on the car retail sector's ongoing vehicle supply shortages? Please leave a comment
Vote
View all
3284