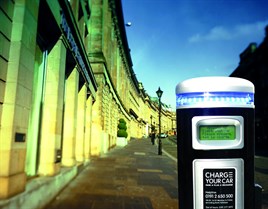 The Transport Select Committee, which is charged with scrutinising the Department for Transport, is launching a report which questions whether its plug-in vehicle strategy is a good use of public money.

It has warned that consumer demand for plug-in vehicles remains at a low level and it believes the Government grant of £5,000 off a plugged-in vehicle is not proving effective to encourage demand.

There is currently a network of 1,600 charging points available across the UK.

Louise Ellman MP, Transport Select Committee chair, said: “Carbon emissions from transport must be reduced if the UK is to meet its climate change targets, but public money must be targeted on effective policies.

“So far, Department for Transport expenditure on plug-in cars – some £11 million – has benefited just a handful of motorists. We were warned of the risk that the Government is subsidising second cars for affluent households; currently plug-in cars are mostly being purchased as second cars for town driving.

“It is also unclear whether the provision of public charging infrastructure encourages demand for plug-in cars.

Indeed, the Government does not even have a register of all the chargepoints installed at public expense.

“Ministers should not sit back and hope that the Government’s policy on plug-in cars will reduce transport carbon emissions. Far more work is required to ensure that this programme is a good use of public funds.”

-The Department for Transport should clarify the reasons for the under spend in its low carbon vehicle programme.

-As part of the next spending review, the Government should set milestones for the numbers of plug-in cars it expects to see on the roads so that the success of its low carbon vehicles strategy can be assessed within that spending review period.

-The DfT should evaluate how effectively the provision of public infrastructure is encouraging consumer demand for plug-in vehicles.

-Making sure that vehicle owners can access chargepoints across the UK should be a priority within the DfT’s plug-in vehicle strategy. The DfT should also set out how it will work to remove barriers to chargepoint access across the country.

-An accurate and comprehensive registry of chargepoints installed by the Plugged-In Places scheme should be made available within the next six months. Publication of a full registry should encourage private chargepoint providers to upload their data for public use. It should be made a requirement of Plugged-In Places funding that location details for chargepoints installed using this funding are uploaded to the National Chargepoint Registry.

-Plugged-In Places funding should include provision for measures to promote public awareness of the charging infrastructure and the plug-in vehicles grant.

-The DfT should set out how it intends to reach agreement in the EU on the type of infrastructure to be used as standard for plug-in vehicles.

-The Government must avoid creating instability in the plug-in vehicle market through a lack of consistency between departments in their approaches to financial incentives for these vehicles and adopt a more coordinated approach to such incentives across Whitehall.

The British Vehicle Rental and Leasing Association (BVRLA) has welcomed the report .

“Nearly two-years on from the launch of this policy, we have a huge underspend and just a trickle of plug-in vehicle sales.

“Companies and drivers still have a lot of uncertainty about this new technology and these cars aren’t going to start selling in serious numbers until the Government undertakes a major review of its strategy and incentives.”

The BVRLA is suggesting an array of long-term incentives that would also appeal to the second and third owners of used electric vehicles, instead of throwing £5,000 at people who buy one new.

These incentives could include a reduction in or exemption from Vehicle Excise Duty for the life of the vehicle; financial help with installing domestic charge points; guaranteed lower rates of company car tax; and exemption from parking fees and congestion charges.

The BVRLA also agrees with the Transport Committee’s suggestion that the Government needs to set targets for the uptake of electric vehicles, so that the success of its Plug-in Car Grant incentive can be more accurately measured.