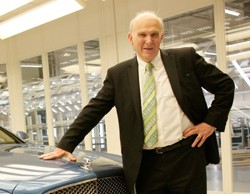 The Government has agreed to put £1 billion into a new UK business bank which will be created specifically to help fund small to medium sized businesses.

Cable believes the new bank could unlock up to £10bn in total for businesses struggling to gain finance from high-street banks.

Cable said: "We need a new British business bank with a clean balance sheet and an ability to expand lending rapidly to the manufacturers, exporters and high-growth companies that power our economy.

“Today I can announce we will have one. I am working with the Chancellor to develop a state-backed institution that will combine up to a billion pounds of new government capital with a larger private contribution."

The new business bank will be funded by the “underspend” of Whitehall departments and businesses will gain access through “peer-to-peer” lending like Zopa which connects people with money directly to people who want to borrow.

“It is encouraging that the Government plan to offer assistance to small and medium sized businesses at a time when they need it most. A UK business bank will help businesses by addressing the existing problem plaguing these businesses – the ability to secure a loan.

“We hope the incentive will deliver on its promise and boost the amount of small and medium sized businesses that are able to loan money.”

John Cridland, CBI director-general, said: "By bringing together all existing support into a one-stop shop, and by increasing the supply of capital to firms that want to grow long-term, the business bank has the potential to support lending and help small and medium-sized businesses to grow.

"The bank could also play a vital role in packaging up and selling debt from medium-sized companies, allowing them to access vital finance streams.

"The Government must now work swiftly to gets the bank up and running so that it can start helping small and medium-sized businesses as quickly as possible."

The British Chambers of Commerce (BCC) has argued for months that Britain needs a state-backed business bank, in particular to support the aspirations of new and fast-growing companies.

It said: “Our existing financial institutions, including the high street banks that historically financed most business expansion, have a sharply lower risk appetite today than they did in the past.

“Banks’ loan books are significantly smaller than they were, and have continued to contract in recent months.
“And despite protestations to the contrary, that risk appetite will continue to decline over the coming years as new domestic and international regulatory regimes, shareholder demands, and ever-higher capital requirements further constrain their capacity to lend."

The BCC believes the new bank could be the coalition’s legacy to Great Britain and create a “truly-business friendly environment”.