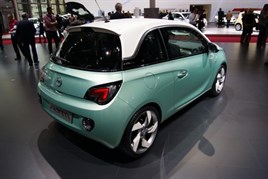 The UK is a shining light in an otherwise bleak European car market, according to Vauxhall chairman and managing director Duncan Aldred.

Speaking after the unveiling of the new Adam city car on the eve of the Paris motor show, Aldred said manufacturers in Continental Europe are looking with envy at the UK market which is expected to see close to 400,000 registrations of 62-plate models in September.

"This sort of figure makes us stand out in the European market place," he said. "The UK is a shining light in an otherwise bleak market, particularly when you look at southern Europe as a whole."

Aldred said that while the huge Russian market took millions of cars it is not particularly profitable for car makers and even the traditionally strong German market is showing signs of slipping but the UK is a profitable place in which to sell cars, helped by the exchange rate and the weak Euro.

He went on to call for the Government to help the UK motor industry with a strategic long term plan which it would stick to and consider how the automotive sector could be helped to create jobs and wealth in Britain by attracting more manufacturers and component suppliers to make more in the UK.

"With the work being done by the automotive council the Government now realises the enormous potential of the sector to create wealth in Britain," said Aldred, adding, "What we need is not only more locally sourced components which would cut down on logistics costs but also more cars and vans being built here and there is no reason why in a few years we should not be making all the cars we buy here."

Vauxhall want to triple the UK-content in their Astra cars built in Ellesmere Port and Vivaro vans out of Luton but needs more supplier support to raise it from the current 10 per cent to 30 per cent by value.

Ironically this week, the two Vauxhall plants suspended production for five days to reduce over-supply into Europe and Aldred said he hoped this would be the only time they did it but they had to look at developing situations all the time.

Adam will be sold in three trim levels, Jam, Glam and Slam with 70ps 1.2 and 87ps or 100ps 1.4 petrol engines and later there will be a 1.0 direct injection petrol with 6-speed ‘box which dips under the 100g/km mark. Paint and options include the latest in car media systems which will be cutting edge and highly desirable.

Vauxhall anticipate selling between 10,000 and 12,000 Adam models in Britain in a full year and that 80% will go to retail buyers.

AM Poll
How has the COVID-19 pandemic affected your attitude or mental health? Please leave a comment
Vote
View all
2534