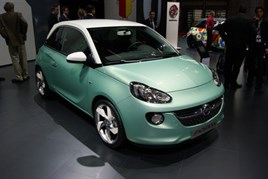 There's no hiding the importance that Vauxhall is giving to its new small car, the Adam.

It is the only model the brand is showing at the Paris Motor Show and Vauxhall hopes the new model will help to elevate the brand and compete with small premium products like the Mini Hatch and Citroen DS3.

Order books are now open and the Adam will go on sale early next year from £11,255, although Vauxhall expects the average retail price in the UK will be much higher than that because of the vast range of personalisation possibilities.

"This won't be cheap transport - it is a premium A-segment car," says Mike Ableson, GM's vice-president of engineering.

It makes use of modified Corsa architecture but has a new body and interior aimed at a relatively young, affluent target clientele.

Connectivity via apps downloaded onto an Apple or Android smartphone, a feature GM calls Intellilink, is expected to be one of the big selling points. It will give owners access to podcasts, internet radio and smart navigation, but not all data stored on a mobile phone.

The car will be built alongside the Corsa at GM's Eissenach plant in Germany and will initially go on sale with 1.2- and 1.4-litre current-generation Corsa petrol powerplants.

But a new family of direct-injection turbo units varying in size from 1.0 to 1.4 litres and delivering 'world-class efficiency' will succeed these within 18 months. There will also be the option of a seven-speed double-clutch transmission in time.

There won't be a diesel Adam, however. "Diesel is very low volume in this sector and emissions standards are getting tougher all the time," said Ableson. "This affects the material cost. It's something we are having a long-term debate about."

Work on Adam started only three years ago, so the whole programme has been pulled together unusually quickly, even though it meant some fairly major changes at Eissenach to allow it to handle the multi-colour paint schemes and personalisation options on offer.

Adam will be a Europe-only car, and GM will not be drawn at this stage on whether it will follow the lead of Mini, Fiat and Citroen in offering different body styles.

"We need to see how it does first, but from the speed we have completed this programme you can see how quickly we can act if we want to," said Ableson.

GM plans 23 new or refreshed models in Europe between now and 2016, including Adam, the recently revealed Mokka compact crossover and a medium-sized convertible to be known as the Cascada.