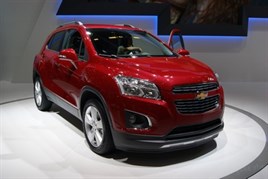 Europe is the next frontier for Chevrolet as it builds its global presence, says dealer development vice president Jim Bunnell.

Since 2005 when the new Chevrolet business was set up it has steadily grown but he acknowledges it still has some way to go.

"There are brands in Europe which have been around for a hundred years and we recognise not so many buyers will be familiar with Chevrolet, but we are about to change that," he said.

It has been building up its model lines and is now represented with a vehicle in the major European sectors and the latest Trax MPV gets its world debut in Paris.

Last year, Chevrolet sold about 4.77 million models and three million so far this year, so it's on track for five million registrations in 2012 across Europe.

It has 1,900 European dealers and over 60 in Britain and is outperforming the national average for sales and wants to ensure the business is profitable for them, said Bunnell.

"It's a small brand but we have big ambitions," he added. "We want to grow at the right pace and do it right so our dealers are profitable and their customers are satisfied with the products and services they are getting. Profitable growth is our objective."

He said Chevrolet has introduced 10 new models in 18 months and more are in the pipeline but it was determined to look at each segment very carefully before deciding whether to introduce a model so that the brand built loyalty based on good residual values from desirable models.