The majority of dealers say the relationship with their brand partners is getting worse.

Sue Robinson, director of the National Franchised Dealers Association, said: “Manufacturers are still demanding high investment levels from dealers even through vehicle sales are low in comparison to sales pre-recession.

"This is coupled with changes to EU legislation that will allow manufacturers to exert greater control and demands on dealers and their facilities.

“Manufacturers continue to take an aggressive stance when setting targets. Manufacturers have used the reported rise in registration figures during 2012 as an opportunity to increase targets. Many dealers feel they have little ability to negotiate with manufacturers on targets.”

The National Franchised Dealers Association 2012 Dealer Attitude Survey, published today, shows that although profits and profitability ratings have improved slightly, dealers remain concerned about the standards imposed on their dealerships.

When rating the partnership they have with their manufacturer, 45% of networks improved their score. On future profitability of their business the all dealer average improved from 3.0 to 3.2. And when questioned about the dealer standard their manufacturer sets them only 36% of networks improved their rating and the majority of respondents gave a score below the average point.

There has, however, been a small rise in the overall value of the franchise.

When asked how satisfied they are with their profit return by representing their brand, the all dealer average increased from 2.7 to 2.9, with Land Rover, BMW, Kia, Mercedes and Toyota the top 5 franchises. The least valued franchises, according to respondents, are Honda, Seat, Mitsubishi, Renault and Alfa Romeo.

However, the trend towards diminishing dealer/manufacturer relationships, highlighted in the Winter 2011-2012 Dealer Attitude Survey, continues.

When questioned about their ability to do business with their manufacturer on a day-to-day basis, 64% of networks reduced or maintained their rating since the last survey.

And when asked about the partnership they have with their manufacturer, 57% of dealers reduced their rating and 64% scored below the average mark.

When dealers were asked how satisfied they are with their profit return by representing their brand, the responses reveal an overall improvement with the all dealer average increasing by +0.2 from 2.7 to 2.9. This is supported by the fact that 57% of dealers returned an increased or static score since the last survey.

Despite the above, a number of networks have shown a degree of dissatisfaction. Alfa Romeo decreased its rating by -0.8 and now sit 2nd from bottom in the rankings table. Fiat, Lexus and Volvo all returned a downward score of -0.5, whilst Mercedes, Nissan and Seat all responded with a negative rating of -0.4. Honda moves down the ratings table with a decrease in score of -0.3.

More positively, there is a significant increase in rating of +1.1 from the Jaguar network. Mazda improved its score by +0.9. Audi sees an upward rating of +0.7 as does Citroen, which sees its highest rating since summer 2002. Other networks to show an improvement include Ford +0.3, Kia +0.5, Suzuki +0.5 and Vauxhall +0.6.

Generally, dealer margins and profits are still poor, although the results would suggest some improvements in certain networks. The huge increase in Jaguar and Mercedes contributed significantly to the rise in the average score across all brands.

It would appear from dealer responses regarding future profitability that there is a ray of light ahead as the all-dealer average score has improved by +0.2 from 3.0 to 3.2. This is supported with 64% of networks either increasing their score or remaining static and 57% of networks scoring on or above the average mark.

Alfa Romeo fell by -0.6 and drops to second from last in the ratings table. Honda, Seat and Subaru all return a decline in score of -0.5 and all sit in equal fourth from bottom in the rankings. Also expressing a degree of dissatisfaction were Fiat dealers -0.4, Lexus -0.3 and Nissan -0.4.

The Jaguar network increased its score by +1.2 and take fourth spot in the ratings.

Renault also improved its rating quite considerably at +0.8, although still fail to reach the average mark. Other noteworthy improvements include Citroen +0.5, Kia +0.3, Mercedes +0.5, Suzuki +0.7, Toyota +0.4 and Volvo +0.7. Land Rover remains top of the table.

Dealers are obviously hopeful that profits and margins will improve. The last few years have been difficult times for dealers with vehicle margins having been squeezed, and more importantly the number of cars sold has been reduced, says the NFDA.

A return to better market conditions, continuing cost control, as well as some dealer consolidation, will help the profitability of networks.

The NFDA DAS survey is carried out twice-yearly. The latest survey sets out the views from dealers in 29 networks. Each rating reflects the consensus view based on responses from typically one in four dealers within each network.

Dealers were asked to respond to questions covering significant aspects of their business relationship with their manufacturer. From these responses scores have been produced on a simple five point scale, running from 1 - very dissatisfied/very poor to 5 - very satisfied/very good (question 21 is rated from 1 - very poor to 10 - excellent).

How do you rate the future profitability of your business? Score: out of 5 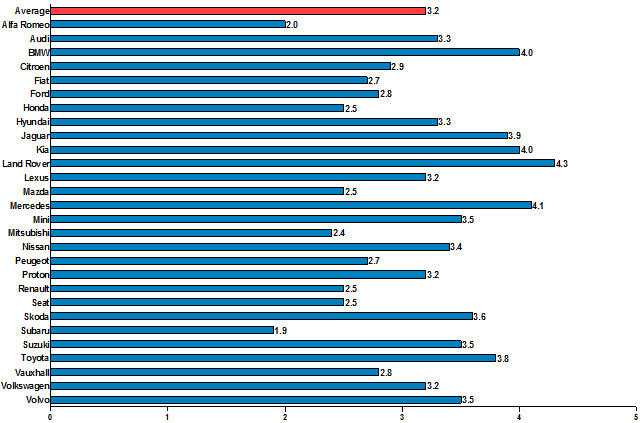