The average dealer made a profit of £9,000 in October or 1.3% return on sales (ROS), according to the latest dealer profitability figures from ASE.

While it is not a huge amount it is significant that retailers are continuing to make profit in non-quarter-end months with the average dealer only losing money in three months of 2012.

This result is further put into context when compared to the position during 2011 where the average dealer lost £4,000 in October.

Mike Jones, ASE chairman, said: “The key to success continues to be an improvement in the vehicle sales department.

“While the sales per salesman statistics may be skewed as a result of dealers changing their classification of salesmen, the improvement in vehicle expenses as a percentage of gross in this department has made a significant difference to bottom line profit.

“This is indeed true of service and parts as well as we see an improvement in the expenses ratio of all three principal departments. Average hours sold are certainly down, however most dealers have managed to protect service profitability through cutting expenses.”

The used vehicle department continues to show improvement, although there are slight warning signs emerging.

Used vehicle return on investment calculated on a rolling 12 month basis has crept over 90% reflecting the increased focus on used car sales by the entire industry.

Jones said: “During October there was, however, an increase in the average stand-in-value of vehicles available for sale. The profitable (and quick) disposal of these relatively high priced vehicles will be vital for full year profitability.

“It now looks certain that the industry will return an average profit of over 1% for 2012 – a superb result in very challenging economic times.” 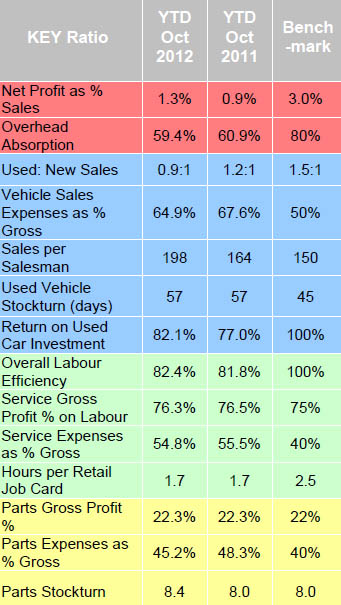