Average profit for franchised dealers in November was just £351, a small amount but a significant improvement of the loss of nearly £5,000 in the same month in 2011. It continues a positive trend in the second half of 2012 as the trade consistently came ahead in year-on-year comparisons.

According to the latest dealer profitability figures from ASE, average rolling profit per retail site is more than £138,000 producing a return on sales of 1.1%.

This represents a gain of £50,000 compared to the rolling 12-month position at the end of November 2011, with all this gain being achieved since March.

The majority of the profitability increase is a result of greater volumes of new vehicle sales with the franchised sites selling an additional 60 new cars on average in 2012 compared to 2011. This has driven an improvement in the ‘sales expenses as a percentage of gross ratio”.

Used vehicle results have also improved with the rolling 12 month used vehicle return on investment now over 85%. ASE saw increased gross profits across the sector in 2012 allied to a small increase in used vehicle volumes.

Overhead absorption has also held up more resiliently than expected. Dealers have managed to produce a small growth in service and parts profits which, whilst not as large as the increase in overheads, has helped stem the downward slide.

ASE expects the December results to be strong as dealers introduce volume and standards bonus, which should be good based on the number of cars sold in the year. This will likely see the national average rise to 1.3% for 2012, an unexpected result at the start of the year. 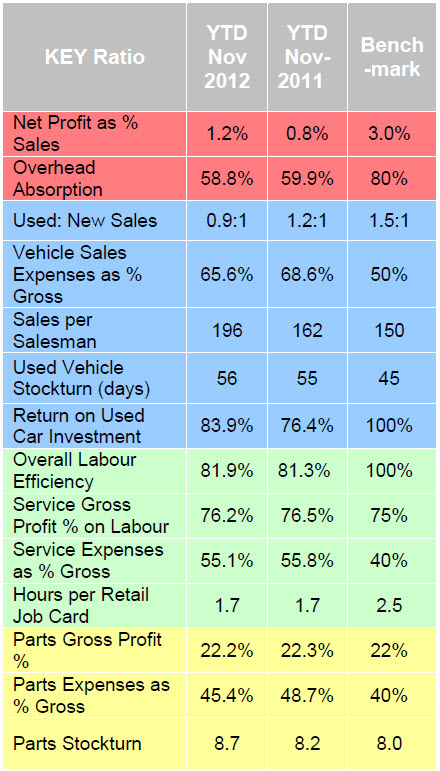