Kia focuses on customer reviews in 2013 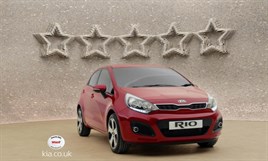 Kia Motors (UK) is focusing part of its 2013 marketing campaign on what its customers think about its cars in a bid to further enhance the public perception of the brand.

A new television campaign starts today, fully supported by press, digital, outdoor and cinema, which draws on the recent awards from Which? as ‘Best Car Manufacturer of 2012’ and JD Power which ranked the Kia Sportage the most satisfying car to own.

The advert carries the strapline “cars which speak for themselves, customers who speak for us,” and uses an animated keyboard wall as a metaphor for the thousands of customer reviews, creating different backgrounds and visuals highlighting the new range of cars.

Kia is partnered with Revvoo to publish independently-verified owner reviews on its website and now has over 3,000 reviews online. It has an average product satisfaction rating to date of 9/10.

“Our seven year warranty is an expression of confidence in the quality of all out new range of cars, but we know what we say as a brand is far less convincing and compelling than what real owners say. So, we made it easier for customers to really get to know what owning a Kia is like in real words from real people.”

Research into public interest in online reviews has shown that 72% of consumers trust online reviews with 67% reading between two and 10 reviews before making the purchase decision.

From the same research, 22% of adults are influenced by comments and reviews of other internet users.