Dealer profitability fell in lead up to September plate-change

The average dealer lost just under £11,000 in August, £250 more than they lost in the same month of 2012, according to the latest profitability figures from ASE.

August is never a good month for car dealers and the performance comes despite positive news in recovering consumer and business confidence, as well as strong new car registrations.

ASE puts the loss down to a combination of holidays, good weather, new cars pushed to the plate change month of September. 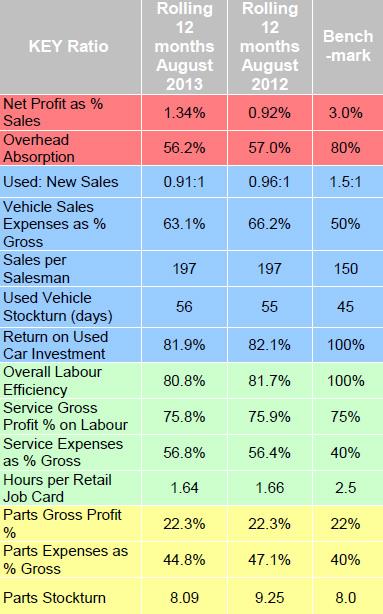 Mike Jones, ASE chairman, said: “While dealers have performed slightly worse than they did in 2012 we should remember that the market was taking off at this time last year and the current year loss of £11,000 is a creditable performance when judged against other prior years.

“Looking at the statistics movement in the key performance indicators has largely stabilised and we are no longer seeing the significant gains made earlier in the year.

“Indeed, during August, we have seen a slight deterioration in overhead absorption, a marginal gain in vehicle sales expenses as a percentage of gross and no change in used vehicle return on investment. We will be monitoring these ratios closely to ensure that we are not seeing a turning of the tide and the start of deterioration in motor dealer profitability.”

Jones said the overall result for the year will largely depend on dealers’ September performance.

The registration statistics indicate that the vast majority of dealers will have hit at least 100% of their new vehicle target producing significant bonus income.

Jones said: “Anecdotal stories of the incentives being given for overachievement of target and stories of a quarter of the month’s registrations taking place on the last day of September means we are expecting a sizeable level of self-registrations.

“Hopefully the strong results for the year to date will see dealers able to hold out enough overachievement bonus to support the losses as these vehicles are liquidated.”