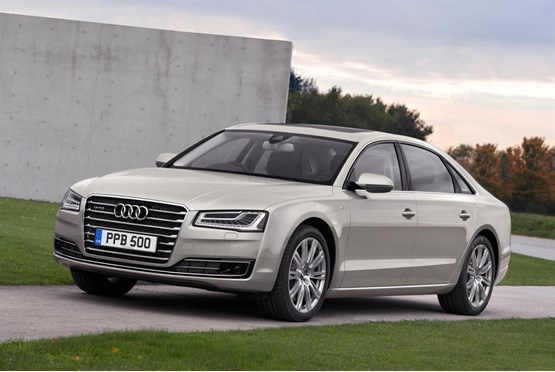 Audi has opened order books for the latest version of Audi's luxury flagship range the A8 ahead of its arrival in UK dealerships in January.

The new model features revisions to its aluminium body and new technological upgrades.

The bodywork has undergone a subtle restyling, while most engines - now all Euro6 compliant - are more efficient and offer more power.

In the UK, the A8 is offered with a choice of three specification levels – SE, SE Executive and Sport Executive. SE models now have new design 18-inch alloy wheels, electromechanical power steering and all-LED headlights with a high-beam assist function.

The lighting and steering upgrades carry over into the SE Executive variants, while the top ranking Sport Executive models gain the new MatrixBeam LED headlights and Mobile Phone Preparation – High with Audi connect.

This feature brings internet-based services such as Google Earth, Google Street View and online traffic information to the car, and also establishes a wi-fi hotspot for connection of multiple handheld devices to the internet.