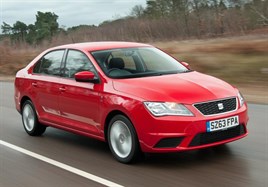 Seat has announced an attractive combination of ‘more equipment for less money’ on its Toledo five-door hatchback.

Seat boasts that all SE models now feature over £1,000 worth of extra kit, including the Media System 2.2 (formerly a £700 option), DAB digital radio and rear parking sensors.

The £430 worth of additional equipment on S models includes a leather-wrapped multi-function steering wheel and rear electric windows.

In another notable development, Seat has added a DSG transmission option to the range-topping Leon FR TDI 184 PS.

Equipped with DSG, it retains the manual’s 7.5 second 0-62mph time, while only slightly raising the CO2 rating.

Seat UK recently celebrated its best ever month for sales, with 8,498 new car registrations in September 2013.