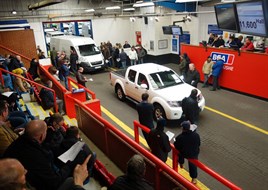 Average values for light commercial vehicles remained high in October, with values down by just £7 from September’s record level.

Average values for all vans fell by £7 to £5,151, with record values achieved in the fleet & lease sector and values at near record levels for dealer part-exchange vans.  Nearly-new values improved to the second highest level this year.

The average October figure of £5,151 for all LCVs was the second highest on record and the third month in a row that values exceeded £5,000.

The average age and mileage for vans sold were virtually static at 59.28 months and 80,725 respectively.

Year-on-year values remain well ahead, up by £704 equivalent to a 15.8% uplift over the twelve month period.  Average CAP performance fell back by just over a point to 103.9% compared to September and was up by two points compared to a year ago.

"With encouraging news about the economy, many LCV dealers are telling us they expect retail activity to hold up well for the rest of this year and into 2014.  The issues over supplies of retail quality used vans remain however and buyers are prepared to bid on older vehicles in good condition and even vans requiring refurbishment to make up the shortfall.

“This stock shortage is a long term issue that results from collapse of the new van market in 2009.  Four years on, the big corporate fleets that provide the bulk of the ‘first time to market’ used vans simply do not have the same volumes to sell."

Ward said professional buyers who typically buy corporate vans at auction are having to bid harder and higher to secure the same stock and this trend is set to continue.

The onset of bad weather usually marks an increase in demand for four wheel drive vehicles and BCA expects to see average prices for 4x4 pick-ups rise in the coming weeks.

Ward said: "While new van sales are recovering, they are nowhere near the levels seen in pre-recessionary times.

"The used sector shortage is set to continue until new van volumes pick up significantly and the economy improves enough to generate a bigger churn of vehicles in the marketplace.”

Performance against CAP fell back by two points to 103.16%, while retained value against manufacturer recommended price (MRP) rose by half a point to 37.43%.

October recorded a year-on-year value differential of £1,317 (25.3%) in the fleet and lease sector, with average age and mileage down over the year.  Retained value against MRP improved by nearly five points over the year.

Part-exchange van values fell back by just £8 from September’s record levels, to settle at £3,501 – the second highest average value on record in the sector. CAP comparisons fell back by half a point compared to September to 106.09%, but continue to outperform the fleet & lease sector.

Year-on-year values remain ahead by £531 or 17.8%, with average age declining marginally and mileage rising compared to a year ago.

Nearly-new LCV values improved by £584 to £13,278 in October, with CAP performance declining by a point to 98.48%.  As always, this has to be taken in the context of the very low volumes reaching the market and the model mix factor.