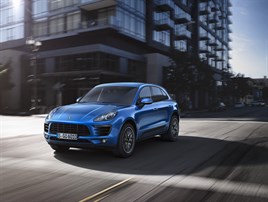 Porsche has revealed its new Macan crossover model ahead of its launch in the UK in the summer.

The Macan will compete with the Range Rover Evoque and BMW X3.

At launch, there are three models on offer, all with four-wheel drive and a seven speed PDK gearbox hooked up to a V6 engine.

Launching the car at the Los Angeles Auto Show, Porsche president and chief executive officer Mattias Muller said: "We have been accused of being controversial in the past when we launched the Cayenne but when people got in the car they soon realised that it drove like a true Porsche and it brought new customers to the brand.

"Now we are bringing Porsche capabilities to the booming compact SUV segment and the Macan will make the marque accessible to many people who did not think they would one day own a Porsche."

The Macan - which is the Indonesian word for tiger - will be built at Porsche's Leipzig plant at a rate of 50,000 a year.

Sales and marketing chief Bernhard Maier said the new model will become a mainstay of the Porsche range. He added: "Demand for urban SUVs has been rising fast and we can now provide a competitor with all the power and performance of a Porsche, and it can go off road as well.

"The core of our brand is intelligent performance and we can now bring that to more people with our new entry level model."