VW could launch plug-in hybrid Up 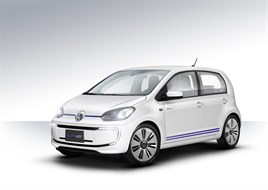 Volkswagen has created a concept of its Up model which features plug-in hybrid technology.

The Twin Up uses a diesel-electric powertrain similar to the one used in VW’s futuristic XL-1.

The new concept features a more powerful electric motor and a greater-capacity lithium-ion battery to cope with its greater weight (1,205kg).

The company is quoting fuel consumption of nearly 256mpg for the car, compared with just under 314mpg for the XL-1.

The respective CO2 figures are 27g/km against 21g/km. The powertrain pairs a 50bhp, 800cc two-cylinder diesel engine - half the engine in a diesel Golf - with the electric motor and a seven-speed DSG gearbox.

The car can run in full electric mode for up to 37 miles at a maximum 77mph, as a hybrid with a combined 75bhp and 215Nm of torque, or as a diesel at speeds of 90mph. It has a range of close to 700 miles using both power sources.

Charging the battery from empty takes two hours using a standard domestic socket. Battery power can be reserved until needed, such as when entering cities where there are emissions taxes.

At the moment the Twin Up is only a study, but it has been designed so that it can be built on the same production line as the combustion-engined and electric versions of the Up if there is sufficient demand to make a business case for it.