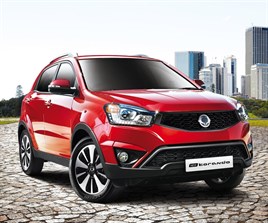 SsangYong UK is looking to boost its dealer network by 2015 as its model range expands.

Chief executive Paul Williams described the task as a "need to improve the gene pool" by recruiting more dealers willing to engage with the low cost Korean brand and its range of 4x4s and SUVs.

He wants 65 sales points by the end of 2014. At present the SsangYong dealer network numbers 52 locations, shared with another franchise or a strong used car operation.

Many, such as Steve Durkin in Nelson, Lancashire, or Chequered Flag in Attleborough, Norfolk, are achieving good levels of incremental sales to their other operations, said Williams, and some are now considering adding the franchise in second sites.

But around a third of all SsangYong dealers are barely selling the new cars, AM understands.

Williams admitted that due to SsangYong UK's small size - it's a 0.04% market share franchise at present with 715 new car and LCV registrations to date in 2013 - it takes a 'tread lightly' approach and has very low franchise investment levels so dealers looking to replace operations for Saab and Subaru have been among those interested.

"It doesn't matter if we don't have the best premises or locations, providing the dealer is willing to work at it. It won't work if they don't have the right attitude, they can't expect people to simply walk up and say they want a SsangYong," he said.

Typical prospective customers tend to be middle-aged, middle-income people with a strong sense of value, and who require a suitable car to tow a caravan, horsebox or trailer.