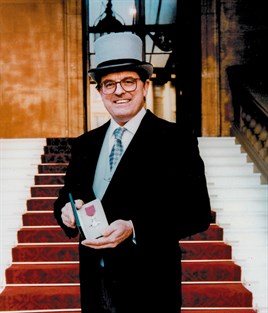 Prescott’s career spanned more than 50 years (36 of which were served with BEN) and he dedicated himself to improving the lives of others.

Prescott became deputy chief executive and company secretary of BEN in 1974 and remained in the post until his retirement in December 2005.

He was instrumental in establishing three of BEN’s existing care centres and the first ever workplace day centre for the elderly in Coventry.

David Main, BEN’s chief executive, said: “David was a true bastion of BEN, an outstanding advocate for the automotive industry and its people, and a recognised authority on charity governance; yet despite all of these commitments David always found time for anyone seeking his counsel.

“He was a truly extraordinary man, who gave freely and graciously of both his time and expertise. His boundless energy and passion saw him become a guiding light in developing the services and care we still offer today and everyone at BEN is extremely grateful for his phenomenal contribution. His loss will be felt throughout the organisation.”

Prescott was known for quietly working away behind the scenes in order to help shape BEN, effect change and provide guidance wherever it was needed and did so without expectation of reward or accolade.

However, in 1994 his contribution was recognised when he received an M.B.E. in the Queen’s Birthday Honours for services to BEN.

After his retirement Prescott’s association with BEN remained and he continued to serve as a Pension Trustee as well as acting as a source of advice and guidance for a number of the team.

Prescott is survived by his wife Ann, their children; Fiona, Laura, William and Mark and five grandchildren – Isaac, Toby, Katie, Sam and Dahlia.

Prescott’s funeral will be held at 3.15pm on November 8 at St Mary's Church, Wendover.

The cremation will take place at 4.45 pm at Chilterns Crematorium, Amersham, to which everyone is invited.
Following the cremation there will be a reception at the Holiday Inn, Weston Turville.